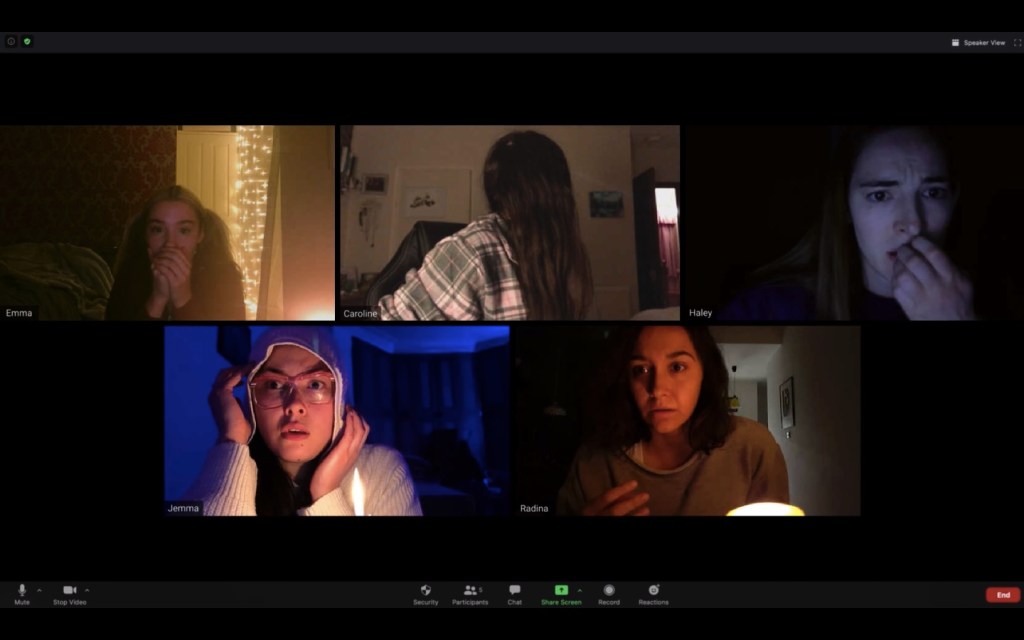 We live in scary times, maybe that’s why scary movies are so popular right now. That’s especially so this week, with IFC Films and the Shudder streaming service delivering standout fright flicks.

“Host”: Considered the first movie made during the pandemic, Shudder’s virtual seance is brisk and freaky and will make you look twice the next time you hop onto a Zoom meetup. Bored from the lockdown, six gal pals toy with holding a virtual seance on a London afternoon. Unwittingly, they unleash a malicious spirit. Director Rob Savage takes a cue from “Searching” for its screenshot conceits, and the result is an effective shocker for our quarantine times. Details: 3 stars; available on Shudder.

“Sputnik”: Part “X-Files,” part ”Alien,” Egor Abramenko’s debut judiciously metes out the gore while creating a don’t-trust-anyone vibe. Set in 1980s Soviet Union, an unorthodox psychiatrist (Oksana Akinshina) is summoned to a secret facility where shady governmental characters observe a hero cosmonaut (Pyotr Fyodorov) harboring an alien inside of him that kerplunks out of his esophagus at night. Dubious intentions from the higher-ups and clashes over the critter’s feeding rituals make this bold original something to snack on. Details: 3 stars; available Aug. 14 at IFC Midnight.

“La Llorona”: If you’re looking for a well-made horror film with a political bent — a la Guillermo del Toro — check out this Sundance fave directed with flair by Jayro Bustamante, who co-wrote the screenplay. The film derives its horror by tying the titular fable — about a tormented woman who wanders the earth after killing her own children — to the 1980s Mayan genocide in Guatemala. The action revolves around a retired military general being sheltered by his family as his litany of atrocities are decried by protesters, and a mysterious stranger enters the household. Details: 3 stars; Shudder.

“Uncle Peckerhead”: With a crass title like one you’d expect something hillbilly awful. But this horror/comedy is outrageously funny, outrageously fun and outrageously gory. Goofy punk band members bum a ride from a mild-mannered, night-time flesh craver (Chet Siegel). Before long, Uncle Peck becomes a roadie on the band’s first tour and takes to devouring dishonest concert promoters. Writer/director Matthew John Lawrence’s rude comedy makes for juicy drive-in viewing, even though it sometimes overdoes the gory humor. If you relished the cheeky charms of “Tucker & Dale vs. Evil,” buzzsaw your way over to this one. Details: 3 stars; available for streaming on multiple platforms.

“Work It”: Netflix cranks out another clumsy, uninspired rom-comy dance flick with not one original move. A spritely teen (Sabrina Carpenter) learns to hoof it in just under a week so she can get into a dance competition, which will hopefully get her into college. The only bright lights here are Keiynan Lonsdale as a diva dancer and Michelle Buteau as a scattered college recruiter. The film’s focus should be on them. Details: 2 stars; available now on Netflix.

“The Tax Collector”: What a waste. Shia LaBeouf and costar Bobby Soto got all tatted up for this rancid bomb — one of the worst movies of 2020. LaBeouf’s a great actor and Soto’s a charismatic one, but they’re stuck in a cliched bottom feeder about SoCal drug running. David Ayer’s disaster is ridiculously inane, offensive and devoid of any redeemable characters or dialogue. I’d rather do my taxes than watch this one again. Details: zero stars; so bad I can’t in good conscious tell you where to find it.

“The Bay of Silence”: Ominous and gripping but also choppy and flawed, this lurid thriller starring the sexy Claes Bang fails to do what it should: surprise. An unstable artist and wife/mom (Olga Kurylenko) flees after her son is born, and her hot-shot architect hubby (Bang) goes on the hunt. Paula Van der Oest’s film is well-acted and sufficiently creepy but lacks intensity. And the “surprise” ending will surprise no one. Details: 2 stars; streaming Aug. 14 on multiple platforms.

“SamSam”: This fluffy French animated affair entertains the little ones with visual flair and superhero storyline. Set in futuristic worlds, Tanguy de Kermel’s feature bursts with color as the young titular character frets about not having special powers like his family and friends. He chums around with a “new girl” in school whose father is a short-fused tyrant. It’s lightweight but entertaining. Details: 2½ stars, available now on various platforms.

“Retablo”: Netflix tosses into its overwhelming sea of movie titles this little pearl, one of the best international films from 2018. Director/screenwriter Alvaro Delgado Aparicio’s intimate father-son story is heartbreaking and beautiful.The relationship between an artistic father and a teen-aged son in Peru undergoes a dramatic change when the boy spots dad in an indiscreet moment. Aparicio’s unforgettable debut immerses us into village life where a conflicted man comes face-to-face with fear, loathing and intolerance. Details: 3½ stars; available now on Netflix.

“The Big Ugly”: A great cast including Ron Perlman and Malcolm McDowell gets dragged down by a predictable plot in this standoff between two unlawful pals. The Southern-fried setting makes for an interesting landscape, but it’s really the better-drawn supporting characters who shine in director/writer Scott Wiper’s drama. Details: 2½ stars, streaming now on multiple platforms.