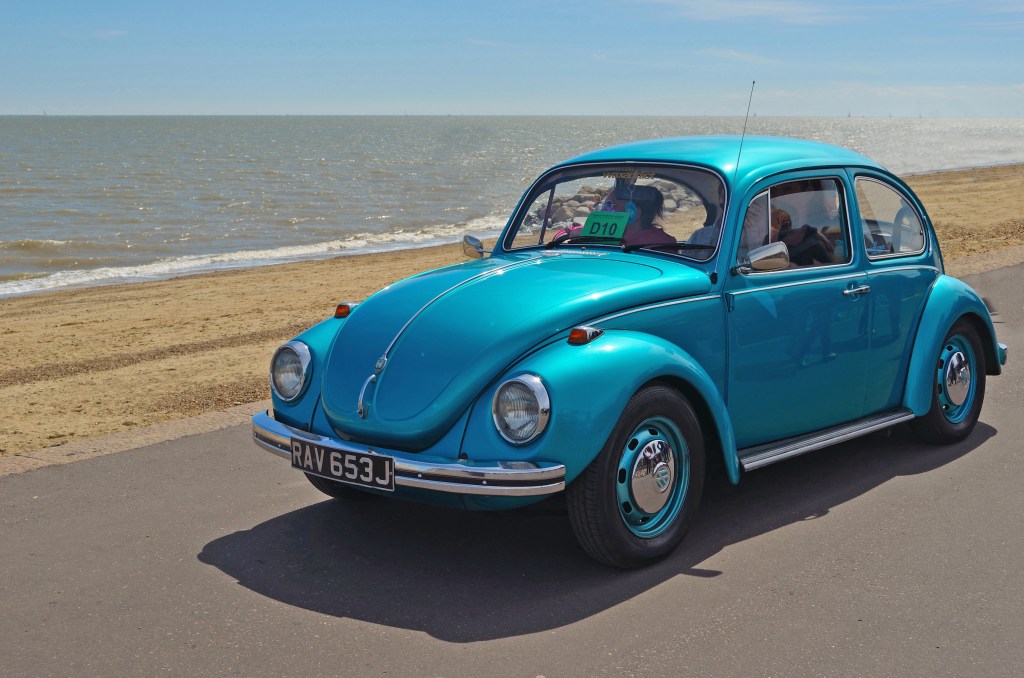 The Bottom Line: Volkswagen sold its first Beetle in the United States in 1949. Since then it has built and sold over 20+ million copies of this iconic economy car worldwide.

Now after 70+ years of Love Bugs, that tradition has come to an end. The 2019 model year is the last year of Beetle production, and it marks the End of an Era. VW has said that it will stop production of the Beetle this year, and will build only 4 trim levels, the Basic model S, the Beetle SE, the Final Edition SE, and the top of the line model, the Final Edition SEL. And you can still buy one in a hardtop coupe, or a convertible. All the factory colors are available, as are a short list of options. My test car was a 2019 Beetle Convertible 2.0T Final Edition SEL model with the 2.0 Turbo engine and every option available in Stonewashed Blue Metallic with a Beige convertible top. The interior colors were Pepper Beige and Black Leather with corresponding Beige paint on the dashboard . The colors are the perfect eye candy for driving around with the top down, as everybody commented on the contrasts of the paint and interior trim.

Now the Beetle will be with us forever as Herbie: the Love Bug and The Transformers in the 1980’s movies. From the Hippy Movement at Haight Ashbury in 1967, then Woodstock in 1969, to Wall Street today, it seems like everybody has a Beetle story to share. VW sold millions of them in the US, and there are still thousands of them on the roads today. As the VW Beetle became the symbol for Peace and Love for all generations and they can still be found around the world in the most unusual places, from Tibet to your backyard.

With the Beetle being part of our lives, and the everyday landscape for over 70 years, it seems befitting that the Final Edition cars be as special as possible. With a base price of under $21,000 and up to $31,890 for my test car, there is a price point for everybody. Of course the Final Edition models with be the collector cars of tomorrow. But either way, get one soon, as this is the end of the line, for now, for the VW Beetle as we know it.

And remember: “You Are What You Drive ©”

Maybe, just for those reasons alone, you should “Drive one, Buy one, Today ©”.

This Bottom Line Review is provided by: Tony Leopardo © AutoWire.Net

“Tony the Car Guy” is an automotive writer, editor and publisher in the San Francisco

Bay Area. If you have a question, or comment for Tony, send it to TonyLeo@pacbell.net