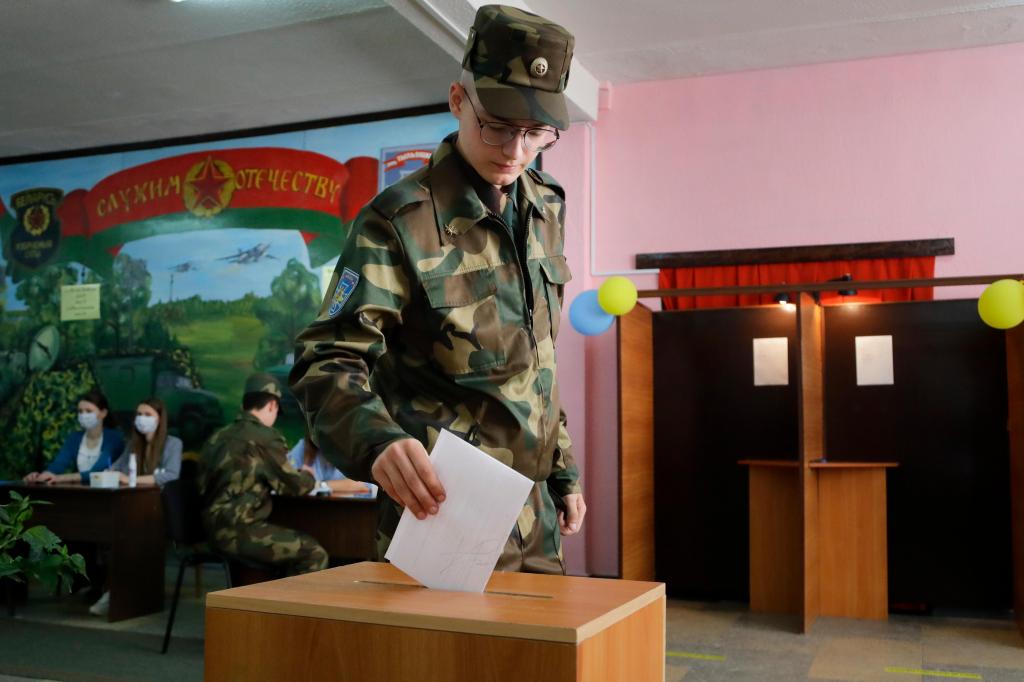 MINSK, Belarus — Belarus police and protesters clashed in the capital and the city of Brest on Sunday night after a presidential election in which the country’s longtime leader sought a sixth term despite rising discontent with his authoritarian rule and his cavalier dismissal of the coronavirus pandemic.

Tensions have been rising for weeks ahead of Sunday’s vote in the ex-Soviet nation, which pitted President Alexander Lukashenko, who has held an iron grip on Belarus since 1994, against four others. The campaign has generated the country’s biggest opposition protests in years. Opposition supporters say they suspect election officials will manipulate the results of Sunday’s vote to give the 65-year-old Lukashenko a sixth term.

Officials had already denied two prominent opposition challengers places on the ballot, jailing one on charges he called political and prompting the other to flee to Russia with his children. The main opposition candidate, Sviatlana Tsikhanouskaya, came under heavy pressure over the weekend as eight members of her staff were arrested, and one of her top aides fled the country on Sunday.

Belarusians weary of the country’s deteriorating economy and Lukashenko’s repression of the opposition coalesced around Tsikhanouskaya, a former teacher and the wife of a jailed opposition blogger, in large shows of support unusual for a country where crackdowns on dissent are routine.

Preliminary results are not expected until Monday, but even before the last polls closed the head of the Central Elections Commission announced fragmentary results, saying voters in hospitals and sanatoria in five of the country’s six regions had given Lukashenko 82% of their support. Long lines of voters meant that some polling stations remained open after their planned closing time.

Police presence in the capital of Minsk was heavy throughout the day and in the evening police set up checkpoints on the city’s perimeter to check residence permits, apparently worried that protesters would come from other cities. Lukashenko had vowed to crush any protests.

About 1,000 protesters gathered near the obelisk honoring Minsk as a World War II “hero city,” where police harshly clashed with them, beating some with truncheons and later using flash-bang grenades to try to disperse them. News reports said police fired tear gas at protesters in the city of Brest.

Three journalists from the independent Russian TV station Dozhd were detained earlier after interviewing an opposition figure and were expected to be deported.

“What has happened is awful,” Tsikhanouskaya told reporters Sunday.

She also rejected exit polls that indicated an overwhelming win for Lukashenko, saying “I will believe my own eyes — the majority was for us.”

Lukashenko himself was defiant as he voted earlier in the day.

“If you provoke, you will get the same answer,” he said. “Do you want to try to overthrow the government, break something, wound, offend, and expect me or someone to kneel in front of you and kiss them and the sand onto which you wandered? This will not happen.”

Mindful of Belarus’ long history of violent crackdowns on dissent — protesters were beaten after the 2010 election and six rival candidates arrested, three of whom were imprisoned for years — Tsikhanouskaya called for calm earlier Sunday.

“I hope that everything will be peaceful and that the police will not use force,” she said after voting.

Tsikhanouskaya emerged as Lukashenko’s main opponent after two other prominent opposition aspirants were denied places on the ballot. One was jailed for charges that he calls political and the other, an entrepreneur and former ambassador to the United States Valery Tsepkalo, fled to Russia after warnings that he would be arrested and his children taken away.

Some voters were defiant in the face of Lukashenko’s vow not to tolerate any protests.

“There is no more fear. Belarusians will not be silent and will protest loudly,” 24-year-old Tatiana Protasevich said at a Minsk polling place Sunday.

As polls opened, the country’s central elections commission said more than 40% of the electorate had cast ballots in early voting, a figure likely to heighten concerns about the potential for manipulation.

“For five nights nobody has guarded the ballot boxes, which gives the authorities a wide field for maneuverings,” Veronika Tsepkalo told The Associated Press on Sunday, a few hours before leaving Belarus.

The Organization for Security and Cooperation in Europe, whose assessments of elections are widely regarded as authoritative, was not invited to send observers

Tsikhanouskaya had crisscrossed the country, tapping into public frustration with Lukashenko’s swaggering response to the pandemic and the country’s stagnating Soviet-style economy.

Belarus, a country of 9.5 million people, has reported more than 68,500 confirmed coronavirus cases and 580 deaths but critics have accused authorities of manipulating the figures to downplay the death toll.

Lukashenko has dismissed the virus as “psychosis” and declined to order restrictions to block its spread. He announced last month that he had been infected but had no symptoms and recovered quickly, allegedly thanks to doing sports. He has defended his handling of the outbreak, saying that a lockdown would have doomed the nation’s already weak economy.

Belarus has sustained a severe economic blow after its leading export customer, Russia, went into a pandemic-induced recession and other foreign markets shrank. Before the coronavirus, the country’s state-controlled economy already had been stalled for years, stoking public frustration.

Yet for some voters, Lukashenko’s long, hardline rule was a plus.

“He is an experienced politician, not a housewife who appeared out of nowhere and muddied the waters,” retiree Igor Rozhov said Sunday. “We need a strong hand that will not allow riots.”

Jim Heintz in Moscow contributed to this story