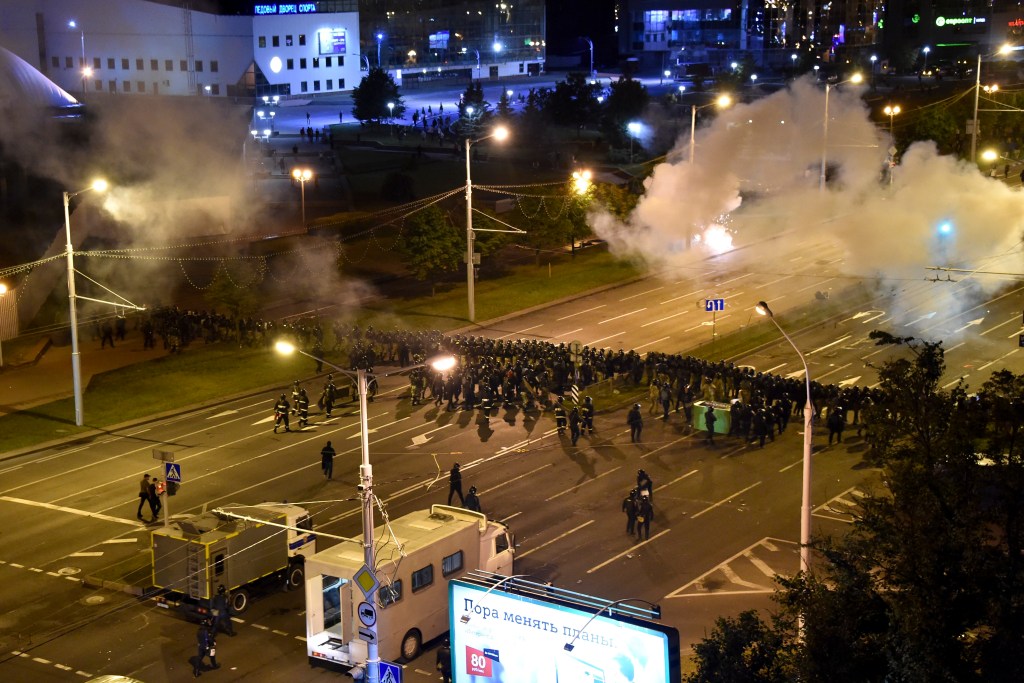 MINSK, Belarus — The top opposition candidate in Belarus’ presidential election, who initially refused to concede defeat amid a massive police crackdown on anti-government protesters, said she had left for Lithuania and called on her supporters to stop demonstrating.

Looking haggard and distressed, Sviatlana Tsikhanouskaya, 37, a former English teacher who entered the race after her husband’s jailing in Belarus, apologized to her backers in a video statement and said it was her own choice to leave the country.

“It was a very hard decision to make,” Tsikhanouskaya said. “I know that many of you will understand me, many others will condemn me and some will even hate me. But God forbid you ever face the choice that I faced.”

In another video statement released later Tuesday, she urged her supporters to respect the law and to avoid clashes with police.

Tsikhanouskaya thanked her supporters for backing her candidacy, but added that “the people of Belarus have made their choice.”

On Monday, she dismissed the official results of Sunday’s election that showed President Alexander Lukashenko winning a sixth term with 80% of the vote and her getting just 10%.

Her campaign aides said she made the unexpected moves under duress. Tsikhanouskaya’s husband, an opposition blogger, has been jailed since his arrest in May.

“It’s very difficult to resist pressure when your family and all your inner circle have been taken hostages,” Maria Kolesnikova, a top associate of Tsikhanovskaya’s, said.

The former candidate’s campaign put out a statement urging authorities to engage in a dialogue with protesters on a “peaceful transition of power.”

The authoritarian Lukashenko, who has ruled the ex-Soviet nation of 9.5 million with an iron fist since 1994, has derided the opposition as “sheep” manipulated by foreign masters and vowed to continue taking a tough position on protests despite Western rebukes over the election.

Thousands of opposition supporters protesting the election results on Sunday and Monday nights encountered aggressive police tactics in the capital of Minsk and several other Belarusian cities.

On Monday, a protester died amid the clashes in Minsk and scores were injured as police used tear gas, flash-bang grenades and rubber bullets to disperse the demonstrators. The Interior Ministry said the victim intended to throw an explosive device, but it blew up in his hand and killed him.

Belarus’ health officials said over 200 people have been hospitalized with injuries following the protests, and some underwent surgery.

Scattered groups of protesters gathered Tuesday for a third day across downtown Minsk. Police moved quickly to disperse them. Officers detained dozens, including some of those who brought flowers to the place where the protester died the previous night.

Motorists were blaring horns in a sign of support, and some used their cars to block police vehicles’ passage. The Interior Ministry warned that such vehicles will be impounded and their owners could face criminal charges.

The ministry said Tuesday that more than 2,000 people were detained across the country for taking part in unsanctioned protests on Monday evening and overnight. It added that 21 police officers were injured in clashes with protesters, and five of them were hospitalized.

The previous day, the ministry reported more than 3,000 detentions and said 89 people were injured, including 39 law enforcement officers.

Several journalists have been injured, and some were detained by police.

Dutch daily NRC said Tuesday that its Eastern Europe correspondent, Emilie van Outeren, was hit in the leg by an unknown projectile when police opened fire on demonstrators Sunday. It said Van Outeren returned to the Netherlands on Tuesday for treatment in a hospital.

The crackdown on protests drew harsh criticism from the European Union and the United States.

Lawyer Mikhail Kirillyuk said police have withheld information about the detainees from their families. “It’s an information vacuum,” he said, adding that he and other lawyers have been unable to locate their clients.

As the Internet has remained down across the country for a third straight day in what appears to be an attempt by the authorities to make it harder for protesters to coordinate their efforts, thousands of Belarusians have struggled to find out what happened to their missing relatives.

“We are still waiting for any sign or information,” said Lena Radomanova, who has been searching for a friend who has disappeared.

Tsikhanouskaya, a former English teacher without any prior political experience, entered the race after her husband, an opposition blogger who had hoped to run for president, was arrested in May. She has managed to unite fractured opposition groups and draw tens of thousands to her campaign rallies — the largest opposition demonstrations in Belarus since the 1991 collapse of the Soviet Union.

Economic damage caused by the coronavirus and Lukashenko’s swaggering response to the pandemic, which he airily dismissed as “psychosis,” has fueled broad anger, helping swell the opposition ranks.

In the video statement posted on her Facebook, Tsikhanouskaya thanked her supporters for backing her candidacy, but added that “the people of Belarus have made their choice.”

“Belarusians, I’m urging you to show common sense and respect for the law,” she said without emotion, reading a text without raising her eyes from the paper. “I don’t want blood and violence. I’m asking you not to confront the police and not take to squares to put your lives in danger. Take care of yourselves and your relatives.”

Hours before that, Tsikhanouskaya disputed the vote results and submitted a formal request for a recount to the Central Election Commission. She stayed in the commission headquarters for hours and faced senior law enforcement officers, according to her campaign aides.

One aide, Olga Kovalkova, said the about-face came under pressure from the authorities who made Tsikhanouskaya read a prepared statement and then drove her out of the country.

“We don’t know what kind of pressure she was subjected to and how they tried to break her,” Kovalkova said. “She couldn’t have said it on her own. She was reading a prepared text.”

She said that Tsikhanouskaya left the country with her campaign chief, Maria Moroz, who had been detained over the weekend. Several other campaign aides have remained in custody.

Lithuanian Foreign Minister Linas Linkevicius said the videos posted by Tsikhanouskaya had been recorded in Belarus before her journey to Vilnius.

On Monday, Tsikhanouskaya disputed the election results and vowed to demand a recount. “We have official protocols from many polling stations, where the number of votes in my favor are many more times than for another candidate,” she told the AP.

When asked Monday if she was planning to go abroad to avoid being arrested, Tsikhanouskaya said she had no such plan and saw no reason why she would be arrested. But hours later she went to Belarus’ Central Election Commission to submit a formal request for a recount and wasn’t seen again until showing up in Lithuania on Tuesday.

She previously had sent her children there after receiving threats early in the campaign.

“I thought that the campaign had tempered me and made me so strong that I could resist anything,” Tsikhanouskaya said in the first of her two videos, her face gaunt and her voice breaking. “But it appears that I have remained the same weak woman that I was before.”

The news about Tsikhanouskaya leaving the country didn’t discourage the demonstrators.

“Tikhanouskaya’s departure won’t change anything, and the protests will continue,” said 25-year-old protester Sergei Yurkevich. “They spit us in the face and want us to remain silent, but we will not stay silent.”

Vladimir Isachenkov in Moscow, Liudas Dapkus in Vilnius, Lithuania, and Mike Corder in The Hague contributed to this report.