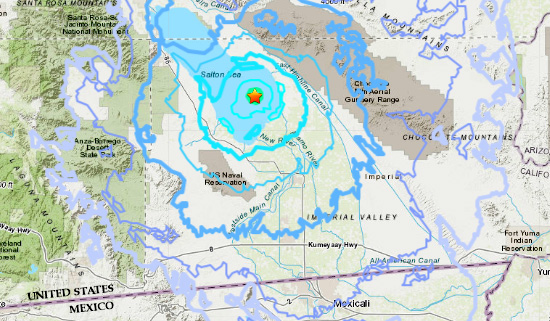 Earthquakes are continuing in the area of California’s Salton Sea, and the U.S. Geological Survey says the event “significantly” raises the probability of a large quake in the region.

The epicenter is under the Salton Sea lakebed in Imperial County, about 8 miles from the southern end of the San Andreas Fault, the USGS said in a news release Monday.

The USGS release detailed three scenarios for the following week:

The agency said the last earthquake of 7+ on the southernmost section of the San Andreas Fault was more than 300 years ago.

“In a typical week,” it said, “there is approximately a 1-in-10,000 chance of a magnitude 7+ earthquake on the southernmost San Andreas Fault.  That probability is significantly elevated while swarm activity remains high.”