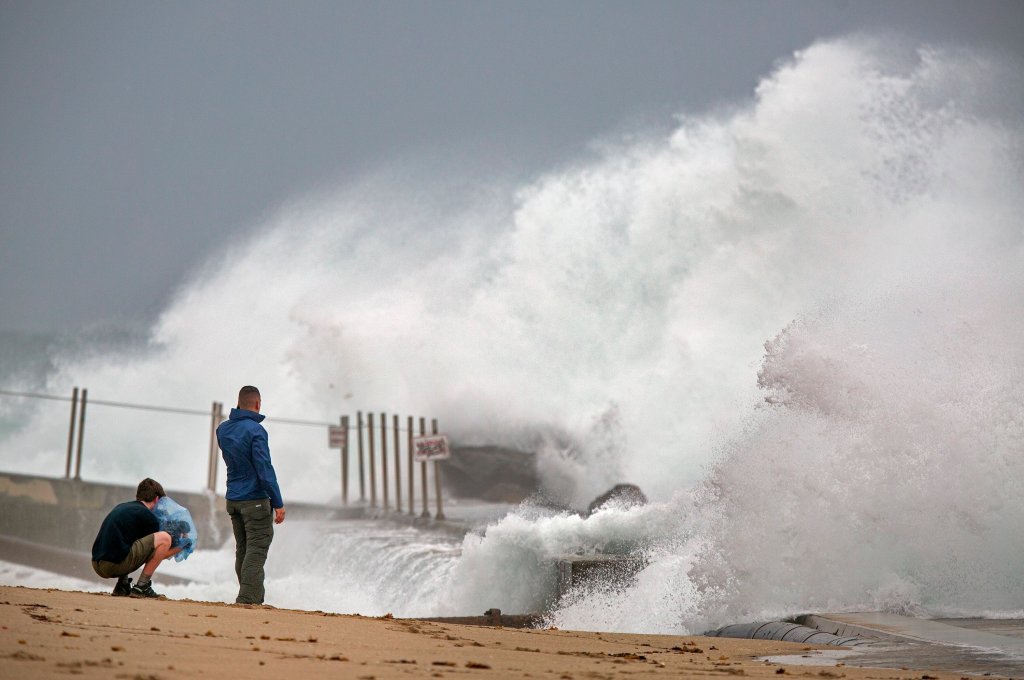 MYRTLE BEACH, S.C. — Isaias was forecast to strike land as a minimal hurricane on Monday in the Carolinas, where coastal residents were warned to brace for flooding rains and storm surge.

The U.S. National Hurricane Center issued a hurricane warning from South Santee River, South Carolina, to Surf City, North Carolina. Isaias was still a tropical storm at 11 a.m. EDT with maximum sustained winds of 70 mph, but it was expected to strengthen into a Category 1 hurricane later Monday, with winds of 74 mph or more.

“We are forecasting it to become a hurricane before it reaches the coast this evening,” senior hurricane specialist Daniel Brown said. “It’s forecast to produce a dangerous storm surge, of 3 to 5 feet in portions of North and South Carolina.”

Isaias — pronounced ees-ah-EE-ahs — could bring heavy rains, too — up to 8 inches in spots as it moves up the coast, Brown said — and “all those rains could produce flash flooding across portions of eastern Carolinas and mid-Atlantic, and even in the northeast U.S.”

Isaias killed two people in the Caribbean and roughed up the Bahamas but remained at sea as it brushed past Florida over the weekend, providing some welcome relief to emergency managers who had to accommodate mask-wearing evacuees in storm shelters. It remained well offshore as it passed Georgia’s coast on Monday.

Authorities were getting ready in Myrtle Beach, South Carolina, ordering swimmers out of the water to avoid rough surf and strong rip currents. Still, many people were out enjoying the beach, walking dogs and getting their feet wet under overcast skies.

“We’re from Michigan, so we get snow and go through it all,” Aliyah Owens, who arrived in Myrtle Beach for a summer vacation Sunday, told WTBW-TV. “A little water isn’t going to hurt.”

The storm remained about 220 miles to the south-southwest of Myrtle Beach at 11 a.m., though conditions were expected to worsen as Isaias picked up speech and marched northward.

At the Caribbean Resort & Villas in Myrtle Beach, grounds manager Jeremy Philo was out before sunrise looking for loose objects that might be picked up and tossed like missiles by the storm’s winds. He tied down pool chairs and removed hanging baskets and patio furniture from hotel balconies.

“Anything that can move we tie down or bring inside,” Philo told The Sun News of Myrtle Beach.

Officials in frequently flooded Charleston, South Carolina, handed out sandbags and opened parking garages so residents in the low-lying peninsula that includes downtown could stow their cars above ground.

Though the center of Isaias was expected to pass Charleston offshore Monday evening, National Weather Service meteorologists said a major flood was possible if rainfall is heavy when the high tide arrives at about 9 p.m.

North Carolina’s ferry operators were wrapping up evacuations of tourists and residents from Ocracoke Island. The ferry division tweeted Sunday that its vessels had carried 3,335 people and 1,580 vehicles off of Ocracoke, which is reachable only by plane or boat. Officials on North Carolina’s Outer Banks were taking no chances after taking a beating less than a year ago from Hurricane Dorian.

At 11 a.m. Monday, the center of Isaias was passing about 90 miles to the east-southeast of Brunswick, Georgia, where state officials closed a towering suspension bridge out of concern that wind gusts of tropical-storm force could endanger motorists.

Isaiah’s passage is particularly unwelcome to authorities already dealing with surging coronavirus caseloads. The storm brought heavy rain and flooding to Florida, where authorities closed outdoor virus testing sights along with beaches and parks after lashing signs to palm trees so they wouldn’t blow away.

About 150 people had to keep masks on while sheltering in Palm Beach County, which has a voluntary evacuation order for people living in homes that can’t withstand dangerous winds, said emergency management spokeswoman Lisa De La Rionda.

Isaias was blamed for two deaths as it uprooted trees, destroyed crops and homes and caused widespread flooding and small landslides in the Dominican Republic and Puerto Rico. Then it snapped trees and knocked out power Saturday in the Bahamas, where shelters were opened on Abaco island to help people still living in temporary structures since Dorian devastated the area, killing at least 70 people in September 2019.