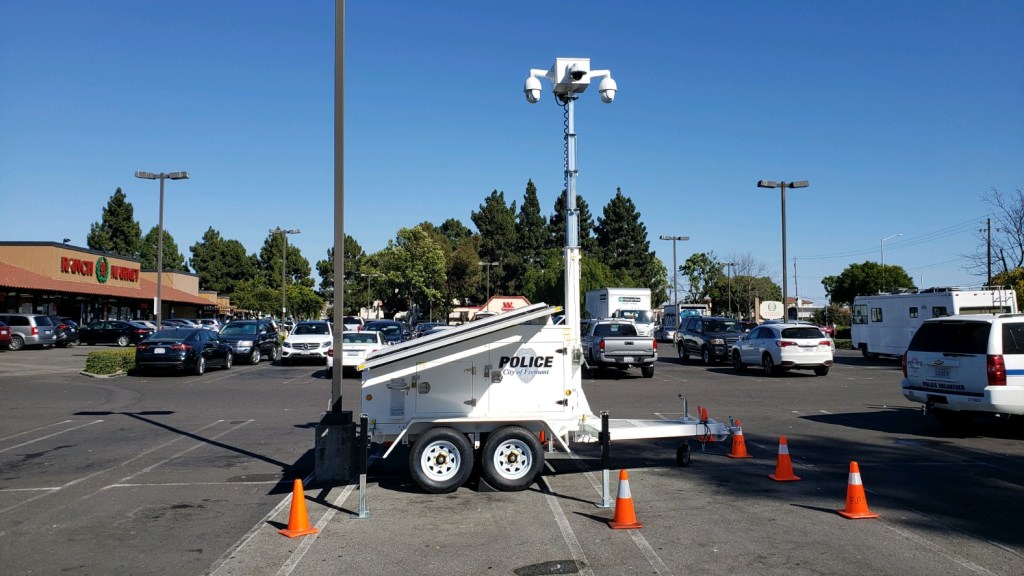 The Fremont Police Department deployed a trailer equipped with multiple video cameras to the parking lot of the Paseo Padre Shopping Center last week after an older resident was robbed leaving a 99 Ranch supermarket.

The shopping center, on the 34000 block of Paseo Padre Parkway, has for years been the site of auto burglaries and robberies, the department said in a Saturday news release announcing the deployment. The trailer includes four cameras that can be monitored live. The feed is stored for 30 days and the trailer does not include an automated license plate reader. It also has speakers but no listening devices, according to the department’s news release.

The Fremont Police Department also has 14 permanent video cameras throughout the city, which include license plate readers, as well as nine patrol cars equipped with license plate readers, according to the department’s website. The department was criticized in 2018 for expanding its surveillance capabilities — at times without the city council’s knowledge — without being able to track how many crimes were actually solved thanks to the new technology.

The department acquired four camera trailers, including the one deployed at Paseo Padre, with a 2018 grant. Geneva Bosques, a department spokesperson, said they’re normally reserved for special events to provide additional security and are not normally watched in real-time but can be used by investigators to help solve crimes after the fact. One other trailer has been deployed at a parking lot behind Niles Elementary School, near School Street, Bosques said.

The trailer was deployed to the shopping center after an 80-year-old woman was robbed after shopping the 99 Ranch supermarket. The suspects, who were described as two adult males in a light-colored sedan, took the victim’s purse. They then went to her home and burglarized it, according to the news release. Bosques said they believe the robbery was an isolated incident and not part of a crime spree.

Bosques said that robberies and burglaries have remained low in Fremont during the coronavirus lockdown, but incidents such as that one can be jarring for residents.

“That’s really scary for our community,” she said. “In this case, it was a matter of moving very quickly to put something visible in place to help our community members see, first of all, that we care and we take this seriously, and second to provide some sense of security.”