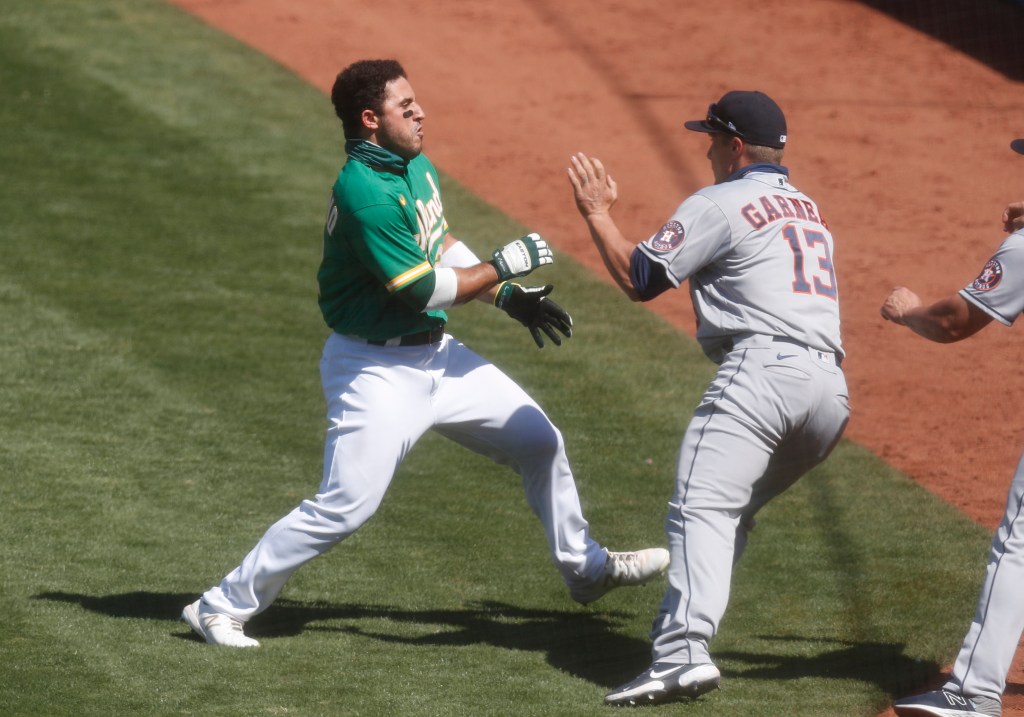 A’s players on Monday came to the defense of teammate Ramón Laureano, who may be facing a lengthy suspension from Major League Baseball for his role in Oakland’s bench-clearing melee with the Houston Astros at the Coliseum the day before.

In the seventh inning Sunday in what would become a 7-2 win by the A’s, Laureano, after he was plunked by a Humberto Castellanos pitch, got into a shouting match with Astros hitting coach Alex Cintrón.

Cintrón then waved at Laureano to come toward him, seemingly challenging him to a fight. Laureano waved back with a dismissive hand motion before Cintrón moved onto the top step of the dugout and walked toward the A’s outfielder.

Laureano, supposedly set off by what Cintrón had said about his mother, threw down his helmet and charged toward the coach but was tackled by Astros players before the two could come together.

“Unfortunately, some things were said about Laureano’s mom in that instance,” utility player Tony Kemp said Monday afternoon on MLB Network before the A’s played the Los Angeles Angels to start an eight-game road trip.

“I think if somebody had talked about my mom like that, I don’t think I would hold back, either. So, can’t blame him.”

Suspensions for the incident could come down as soon as Monday, USA Today’s Bob Nightengale tweeted. Even though the A’s are on a nine-game winning streak and have built a five-game lead in the American League West, they would surely miss Laureano, a rock in center field and a mainstay near the top of the lineup.

“He’s one of the guys that we need,” Montas said of Laureano. “If we lose him, it’s going to be tough.”

It will be interesting how MLB handles discipline here… we’ll be watching closely.
pic.twitter.com/hK2Rlj2Ght

A’s starter Frankie Montas said he was in the Coliseum stands when the incident began and said everybody wanted to support Laureano.

“Ramon’s the type of guy, he has a lot of energy,” Montas said. “For him to do that, somebody’s got to say something. I saw the replays, and I kind of saw one of the coaches (Cintron) say something to him, like, ‘Hey, come here.’

“From a player’s side, hey, you don’t want a coach to try to provoke you. For any man to do that, I don’t know.”

“He was remorseful that the whole thing happened, and we hope it doesn’t happen again,” Baker said.

Likewise, Montas said Laureano, “doesn’t feel that good. He has a pretty good chance to get suspended or punishment for whatever. He knows how much he means (to this team) so he feels pretty bad about that.”

Montas also noted that if Laureano is suspended, Cintrón, too, should be punished in some fashion.

Relief pitcher Burch Smith said the incident might bring the A’s closer together.

“It’s us versus the world mentality,” Smith said. “It’s 28 guys, however many you have in the clubhouse, it’s just a band of brothers. So anytime someone is challenging us or taking shots at us, whatever it is, I feel like we need to stand up for each other and I think that can rally us together.”