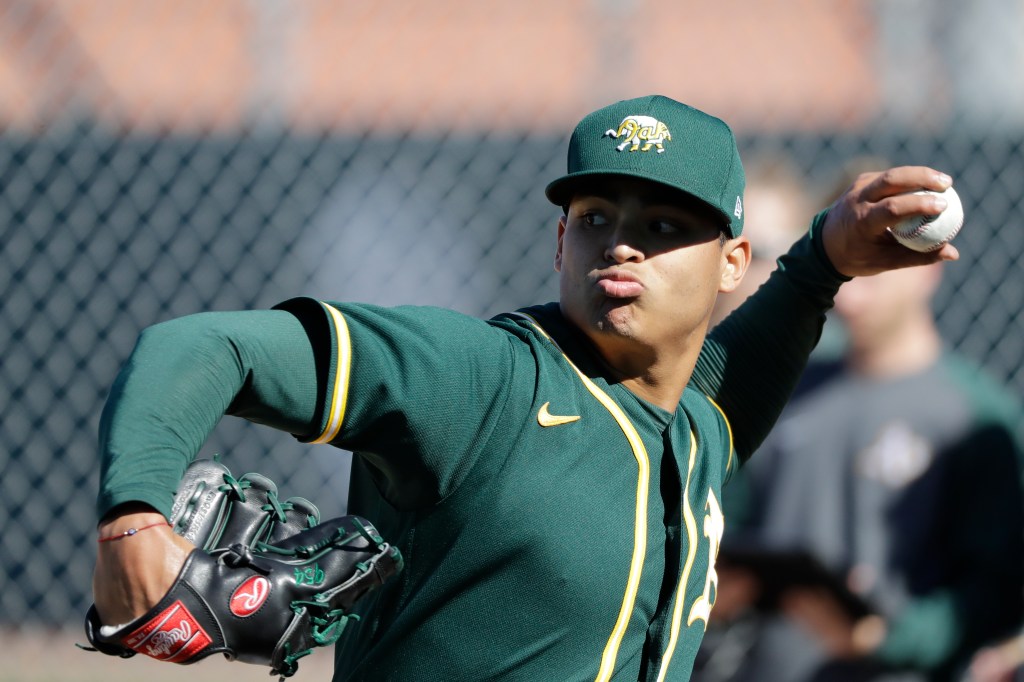 It was revealed July 7 that left-hander Jesús Luzardo had tested positive for the coronavirus. Ten days later, he was able to report back to the A’s summer camp in Oakland.

Luzardo credits the work he was able to do while he was in quarantine for putting himself in the position he’s in right now, as he prepares for his first major league start Tuesday at the Coliseum against the Texas Rangers.

Luzardo, 22, remained asymptomatic after the diagnosis. That allowed him keep up a regular workout schedule and throw off a small mound he has every three or four days.

“At the beginning, it was definitely more about staying and shape and keeping the arm going,” Luzardo said Sunday before the A’s faced the Seattle Mariners at T-Mobile Park. “But towards the back half of that quarantine when we started to see that we were making moves on getting the season going, I was starting to get after it. Was definitely starting to let it go.”

Asked if he was surprised to be in this position considering his time away, Luzardo said, “I didn’t know it was coming, but at the same time, I’m not surprised, just because I feel like they know that we worked really hard in the quarantine and that we trained really hard to keep our arm in shape as well as our bodies.

“Those two weeks off, (I wasn’t) necessarily entirely off. I was working, I was making sure that I was getting my body in line to be able to get going really soon.”

Luzardo has made two appearances for the A’s since the season began, with his first outing  on July 25. Most recently, Luzardo threw 67 pitches over 3 2/3 innings on Wednesday in what became a 5-1 loss to the Colorado Rockies.

He also seems to get a lot of people’s attention when he throws.

“Every time he steps on the mound, I like to watch him pitch,” said A’s righty Frankie Montas, who started that game vs. Colorado. “You know he’s going to do something good out there.”

Luzardo came out firing when he entered the game in the sixth inning with the A’s down 2-1, as his first two pitches were 96 and 97 mph, respectively. But he also used a slider and a sinker to great effect, even throwing changeups for strikes on 2-0 counts.

“Hr’s not afraid of anything. He goes for it,” said Montas, who will start Monday’s series finale with the Mariners. “He attack the hitters, he uses his fastball and all of his pitches in any count. Which, for him to be able to do at such a young age is huge.”

“I try to tell myself that I should probably be smart and not come out of the gates throwing as hard as I can, but my adrenaline kind of gets the best of me for the most part,” Luzardo said. ” I don’t try to ever hold anything back, but at the same time, I do know that I need to go longer in the game. So it’s time to be smart about certain things. We’ll see where my velo’s at Tuesday.”